“This has never happened before!” - Story of the patient who started to hear again with his left ear after many years 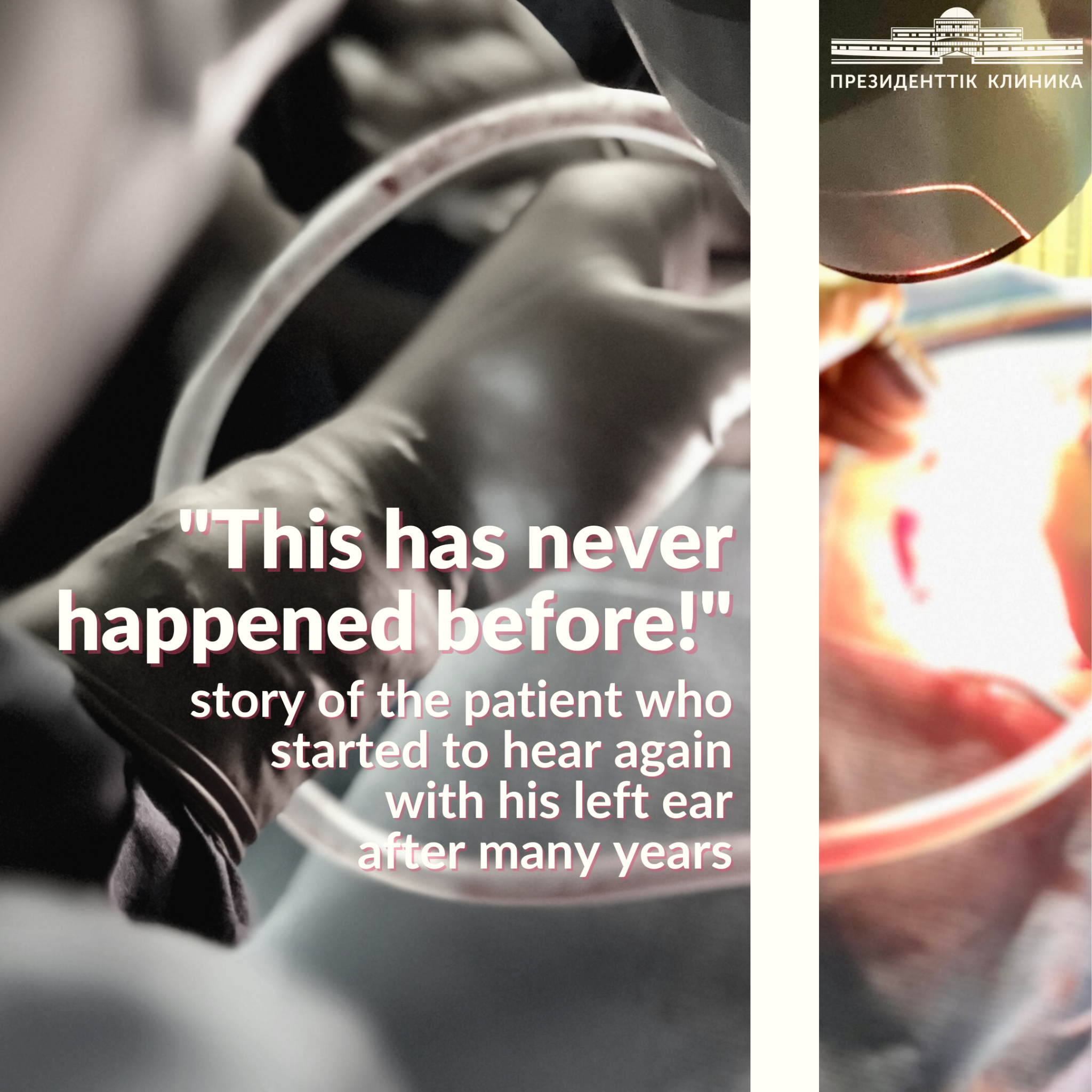 It so happened in Mukhtar’s life that at the age of 32, his left ear no longer worked - he could only hear others with his right ear. “At the age of 7, I got sick, I had otitis. I was in the hospital for about 20 days,- Mukhtar remembers. - But my treatment was not complete, and from that moment on, my hearing in the left ear gradually deteriorated. I went to many doctors: in my Kyzylorda city, in Almaty city and Astana city. I even went to consultation of the doctor from Germany and sent my tests to Turkey. Everyone gave one answer: “It’s been a long time since you can’t get your hearing back”. I was diagnosed with tympanosclerosis, otosclerosis. I’ve already accepted it”.

In 2020, Mukhtar again began searching for doctors who could help him. “On the Internet I found Dr.Talapbek Azhenov. He had good feedbacks, - Mukhtar continues his story - I immediately wrote to him and sent all the test results”.

On February 2, 2021, Mukhtar had a surgery, during which he immediately felt an improvement in his hearing: “The surgery was under local anesthesia - I did not sleep. As soon as the doctors put the implant in the ear, the hearing returned. I have not had this before: I have not heard it like this in a long time. The final result will be clear after the bandages are removed, but I already feel that my hearing has returned”.

According to Dr.Talapbek Azhenov, ENT, Chief of the Surgery Department #1 of the Presidential Hospital, there are quite many of such cases in Kazakhstan: “Unfortunately, due to lack of examination, such patients are often found. The fact is that they need to conduct at least two examinations: audiometry and impedancemetry. If the first examination shows the hearing acuity, then the second will tell us whether there is a rupture of the auditory bones or a defect in the eardrum.

In Mukhtar’s case, when we examined the tympanic cavity, we found that the integrity of the auditory ossicle chain was broken. In a normal state, these bones should adjoin, which will lead to the perception of hearing. Mukhtar had a similar disorder: the lenticular process of the anvil did not come into contact with the stirrup. Therefore, the hearing did not occur. By the way, tympanosclerosis was not found”.

Dr. Talapbek Azhenov also told us about the surgery: “This surgery, ossiculoplasty is an “exquisite workmanship”. It is performed under local anesthesia. This allows us, the doctors, to see the effect of manipulations immediately during the surgery, as in the case with Mukhtar. Analog surgeries are performed under general anesthesia: the patient is asleep, and we cannot assess the effect of the manipulation immediately.

In addition, this surgery is performed without large incisions behind the ear. Instead, we do it as endaural that is inside the ear. With this method, several small incisions are made in the eardrum. After that, we can see with our own eyes exactly where the rupture occurred, and restore the chain of auditory bones”.

According to Dr.Talapbek Azhenov, this surgery is performed in many cases where there is a conductive hearing loss. This is a violation of auditory patency, which interferes with sound transmission. “Anyone who has hearing problems can be examined and try to get their hearing back. We always try to help our patients: explain them clearly what their problem is, and try to solve it”,- Dr.Talapbek Azhenov concluded the story and wished the patient a speedy recovery.

Press Office of the Presidential Hospital