AN UNUSUAL PATIENT: HOW DOCTORS OF PRESIDENTIAL CLINIC SAVED THE DOLPHIN

To do this, doctors-endoscopists had to get into the animal

Two-year old dolphin has bit and swallowed the part of the ball. Several days the dolphin refused to eat, to play and coaches could not handle it. The stаff of dolphinarium raised the alarm and addressed to medical workers. The message was published in corporate chat of doctors-endoscopists.

Doctors of Presidential clinic also saw this message and rose to the call of help. Before starting the surgery they conducted Consilium (Board of the Doctors), found in medical literature similar cases, studied the peculiarities of the structure of the digestive system of the dolphin. Then they loaded the equipment onto the car and drove to the scene of the incident.

The dolphin did not swim for a long time to people: went to the bottom, swam away from the coaches. When the animal was finally able to attract, the doctors straightened it and proceeded to the surgery. To the dolphin did not bite the endoscope, they even had to make a special device.

Arsen Tusupbayev - Chief of the endoscopy department of the Presidential Clinic

“They don’t have one stomach, they have three compartments. We were ready for it. Also there is a dolphin feature with the respiratory system - there in the form of a tube goes to the side, so it was necessary to act very accurately not to cause asphyxiation. We immediately went into with the endoscope, saw foreign bodies - fragments of a ball of red color. A special instrument was captured. But when we started to take it out, we pulled it closer - and here they have such an esophageal sphincter, very dense muscular sphincter did not let it go. Then our doctor Zhenisbek Tynkoziyev smeared his hand with oil and went through with the endoscope, caught this foreign body and pulled out both fragments. We made the revision, made sure that there was nothing left, then administrated medicine for recovery and let it swim. We need to say that animal immediately became active, it started to jump, perform figures. Today we called the administrator – we were informed, that dolphin feels awesome.” 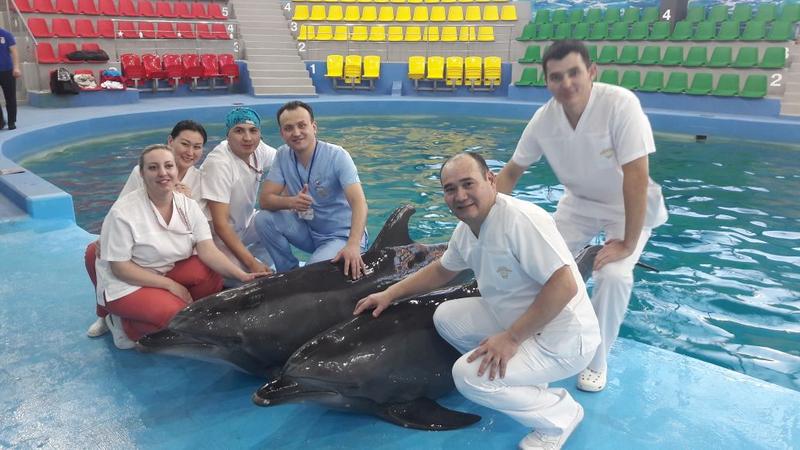